"I'll never forget that gallop along the beach"

“What a wonderful time we had!”

"What A Wonderful Riding Experience We Had"

The gallop and canters on the beach were so cool!”

A package for advanced riders that wish to explore the North Sligo Wild Atlantic Way on horseback.

After getting to know your horse with a riding lesson and a 2-3 hour hack on day one (Tuesday), you will do 4-6 hours riding every day.

Explore sandy beaches, a tidal lagoon, our private O’Connor’s Island and the rocky coast line of Mullaghmore Headland. The Gleniff Horse Shoe Mountain ride and the rural trails at the foot of Benbulben Mountain invite for a hack through the typical west of Ireland countryside.

On the stopovers during your day ride, you will have a picnic or a pub lunch.

Each day’s riding starts at the farm and returns back to base. There is plenty of opportunity to enjoy some brisk beach riding.

Riders need to be comfortable at all paces.

This riding holiday experience is available with B&B, selfcatering or Hotel accommodation.

You will be arriving at the accommodation on Monday.

Day 2: Assessment lesson in the paddock and three-hour beach and bog ride

Today will be an opportunity for Island View Riding Stables to assess you on how you get on with the horse they have picked for you before lunch. After lunch you will go for a three-hour beach and bog ride. The ride will combine a coastal and rural experience. The first part of your ride will take you along sandy Trawalua Beach, then you will follow quiet laneways and century-old bog tracks at the foot of rugged Benbulbin Mountain. This ride will also offer experienced riders an extra opportunity for a canter on the moorlands loop. 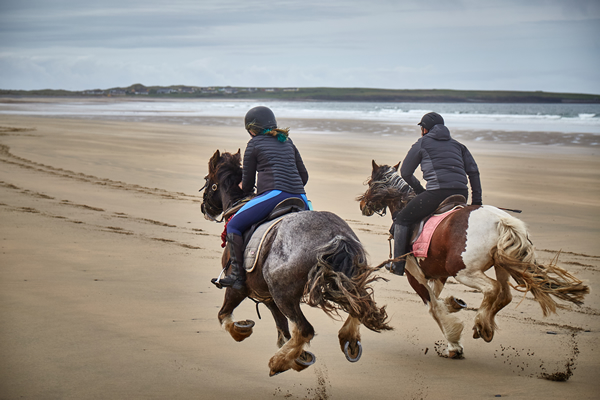 You will get one of the following long rides every day. The following four rides will fall on the day that will be arranged a bit closer to the time as weather and tidal conditions will dictate the departure time. There will be either packed lunches and pub tea room lunches over the next four days.

You will trek across the lagoon to Streedagh Beach where a fresh gallop will await the experienced riders. Three Spanish Armada ships were wrecked here at the Black Rock in 1588. You will explore the sand dunes on O’Connor’s Island, combining some brisk riding on the strand and a scenic stroll over the island with a stop-off in the pub for a pint as well as some hearty food. Seals and migratory birds can often be spotted in the estuary. Depending on tidal conditions, you will enjoy either a picnic or cafe lunch.

This trek is any rider’s dream, where you can discover the pristine and expansive beaches on horseback. You will feel the thrill of crossing the Atlantic channel to Dernish Island. Your horse can enjoy the salty island grass while you relax, have a snack, and explore the sites of ancient farm life on the island. Your picnic site will be at the ruined homestead of the O’Connor family on O’Connor’s Island where a group of young horses and the dry stock cattle herd roams the islands.

After an exhilarating ride on Trawalua Beach, you will follow the boundary of Classiebawn Estate to Mullaghmore. This little fishing village boasts a picturesque 19th-century stone-built harbor. The ride will take you along the headland with some breathtaking views of majestic sea cliffs and the castle – a signature viewpoint of the Wild Atlantic Way. It was here that Lord Mountbatten, the great-grandson of Queen Victoria, was killed by a bomb planted on his boat by the IRA in 1979. On days with a serious swell, top surfers from all over the world come here to take on a wave of up to 50 feet. On this trail, you will take a lunch break in the pub overlooking the harbor.

Only a few miles inland from the coast, you will ride in the barren Gleniff Horseshoe valley which is nestled beneath Benwiskin Mountain. The valley is steeped in history and legend. Set in a spectacular cliff face is Diarmuid and Grainne’s Cave, legend has it that this was the lovers’ hiding place on their flight from Fionn Mac Cumhaill. Barium Meal had been mined in the Dartry Mountains until the middle of the 20th-century. You will have your break and picnic snack at the old barites mill site before you return home along quiet country laneways. The ride will offer you breathtaking views of the 10 townlands and the Atlantic Ocean.

You will depart from the accommodation after breakfast.

Own car recommended. Let us know if you have no transport so we can pick a B&B within walking distance for you. There are lots of restaurants in the area; Henrys offers a free shuttle bus service.

You needn’t worry about anything, all included except dinner on one night when you may want to experience a meal in the local seafood restaurant in Mullaghmore.


Self Catering Apartment for 1 week (7 nights)

Self catering units suitable for 3-6 people in a variety of modern apartments in Grange / Cliffoney area of Co. Sligo.
Departure: Sunday after breakfast

Own car strongly recommended. Lunches not included in self catering package.

Child price applies for children 15 years of age and under.

WE LIVE IN SUCH A BEAUTIFUL PLACE! View from the t

The water is so calm and crystal clear this week

The lads were having a lie in this morning

The 3 hour beach and bog ride according to Lola

Chilling with your mates: Our herd of school horse